Some Bikes are Special

Some bikes are just special, but not for the reasons you may think. They may not be made of the latest and greatest material and they may not have the newest, best components. Sometimes, certain bikes just fit right and just ride right, and you and that bike do rides that you remember, unlike other bikes that you’ve ridden. Bikes like this join you on adventures. 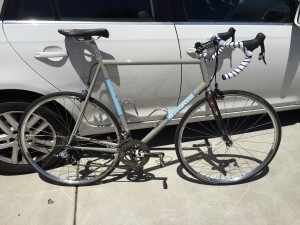 My Davidson custom steel bike is just such a bike. It was built in 1998 with Reynolds 853/753, and originally was painted navy blue with white panels outlined in orange pinstripes with the Davidson lettering in orange. The original fork was a Look carbon fork painted to match (and that fork was noodly as hell). I’ve ridden this bike a lot. More miles than any other bike I’ve ever owned.

This bike bears the scars of being ridden. I cracked the rear stay and had to have it replaced which is why it is has a different paint job now. At that time, I replaced the fork and it was painted to match as well. This is the bike I was riding when I was car doored and I separated my shoulder and fractured part of my shoulder blade. The bike was okay, but the fork took a hit and needed to be replaced, so now it sports the bare carbon model shown. The paint bears countless scratches from times when I dropped the chain, or that time when I snapped my chain and went down really hard, or that time when my wheels came out from under me in a wet corner on a descent.

I’ve ridden this bike on more double centuries than any other I’ve owned. It’s surprisingly comfortable for rides of that distance. I’ve done countless brevets on this bike, riding through the day and into the night and into the next morning. One night on a brevet, I nearly fell asleep while riding this bike, and after a short nap (off the bike in an old schoolhouse), I remember shivering so hard from the cold I could barely keep the bike on the road. Later, we rode near a farm that had what appeared to be camels in it’s pasture. To this day, I’m not sure if that was real or the result of so many hours on the bike.

I’ve commuted on this bike and I’ve even raced it a few times. I’ve dodged turkeys and pygmy goats on this bike. I’ve been chased by cows and countless dogs on this bike. One morning I had a squirrel hit my wheel and, thankfully, bounce off. This is the bike I was riding the day before I proposed to my wife (while carrying the engagement ring because I didn’t want to leave it at the hotel). This is the bike I was riding on the morning of 9/11/2001 when I learned of the attacks. You could say this bike and I have a history together.

Sometimes, I scavenge this poor bike for parts for my other bikes, and I hang the partially assembled bike from a hook and leave it there. Sometimes for a year or more. The downside to being a cyclist is that newer bikes always come along that seem to promise this wonder ride quality. More stiff, more compliant, less weight….Then, something makes me put the Davidson back together and ride it. Every time that happens, I wonder why I stopped riding it. It rides so nicely. It fits me so well. It brings back the memories of all the other great rides we’ve done together. Well, it’s back together now, and I plan on riding it for a while. It may not always be my daily rider, but I’ll never get rid of it, either. Too many memories.